You are reading: 15 WTF Things That Only Exist In Japan

To say that Japan is an interesting country would be an understatement. The country is filled with all sorts of traditions, new technologies and fashion trends. When you think of Japan, some of the things that probably come to mind are: sushi, Hello Kitty, Toyota and anime. While you may or may not understand why those things are so popular in Japan, you should know that there are even stranger things which exist in the country. These things would seem out of place in North America, but they are interwoven in Japanese culture and are seen as totally normal there.

The following list highlights 15 questionable things that exist in Japan. From weird food to bizarre locations, these 15 things will definitely make you ask “WTF?”

In North America (and most of the world), one of the beauty ideals includes having straight teeth. That’s why so many people spend thousands of dollars on braces and cosmetic dental surgery. But, things are different in Japan. There, women actually get surgery so they could have fanged, crooked teeth! That’s right—the look (which is called “yaeba” in Japan) is seen as an “endearing” feature on women in their teens or 20s. It is said to make them look cute and approachable.

This is not the first weird dental trend in Japan. Up until the 19th century, black teeth were considered beautiful, too. So, women actually dyed their teeth black—a far cry from today’s whitening obsession!

Chocolate is great—it’s delicious, simple and familiar. Well, not in Japan. While you may know about flavors such as milk chocolate, dark chocolate, mint chocolate and white chocolate, Japan takes things about 10 steps further. They sell wasabi-flavored Kit Kat bars! That’s probably the strangest flavor, but there are other weird ones, too. For example, there’s also soy sauce, baked potato, cherry blossom and green tea.

Kit Kat is really popular in Japan, as its name translates to an expression of good luck. So, it’s no surprise that Nestle has capitalized on this by introducing wacky flavors targeting Japanese consumers. 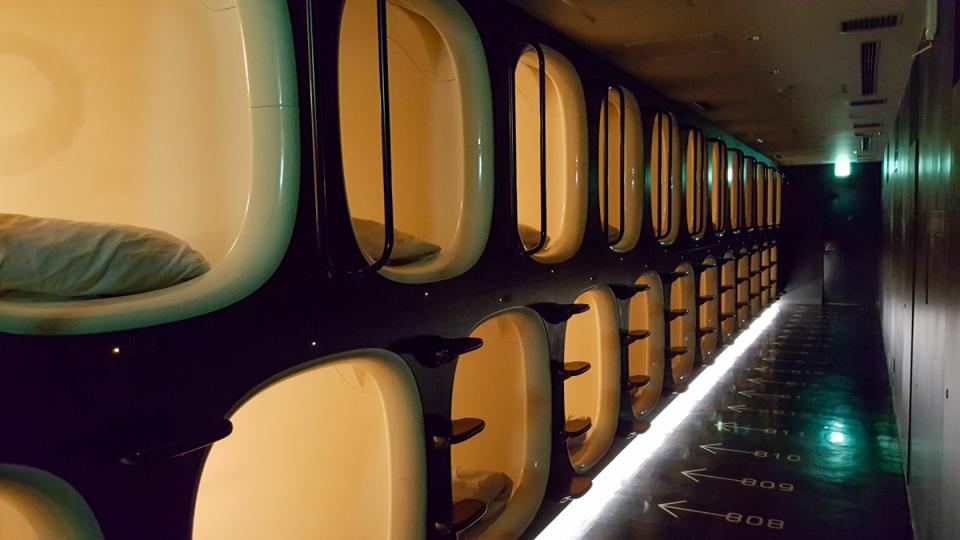 You have probably spent a night in a hotel room (or, at least seen a picture of one). They’re usually spacious and contain a bed, washroom, desk and television for one or two occupants. But, capsule hotels in Japan are completely different. They consist of tiny individual pods stacked on top of each other, with enough room in each for a single bed and a locker. Sometimes, there’s even a TV or radio. The pods are located in a building and there are communal bathrooms. It’s a pretty great idea for those who are broke or just need a place to sober up for the night.

Why do you go to cafés? Probably to eat some pastries or drink some type of specialty beverage, right? Well, in Japan, some people go to cafés to cure their loneliness. Yep, cuddle cafés (AKA “co-sleeping specialty shops”) are exactly what they sound like. For about $77 USD, you can sleep with a woman for an hour (and by “sleep,” we literally mean lie down with your eyes closed). It’s said to bring customers the ultimate comfort. You can also pay extra for a foot massage or the chance to stare into her eyes, too. It’s a bit creepy, but clearly there are people willing to do it. Japan has a lot of bizarrely-themed restaurants. But, without a doubt, one of the weirdest is Modern Toilet. This restaurant has toilet-shaped seats and food is served in toilet-shaped bowls. The foods (which include curries and ice cream) are also made to look like waste. Despite having such a gross theme, the restaurant has been so successful that there are now multiple locations across Asia. We suppose it’s safe to say that the food doesn’t taste as bad as it looks!

So, who came up with this idea and how? Well, the story goes that a man named Dao Ming Zi was inspired by a Japanese cartoon character who loved to “play with poop.” Adopting a child is a totally normal concept. It’s even seen as a very noble thing to do. But, adopting an adult is just strange. Yet, in Japan, it’s a common practice to adopt an adult. In 2008, almost 90,000 men in their 20s or 30s were adopted. The reason has to do strictly with business. If a family owned a business, but had no son (or an unsuitable son) to pass their business onto, they could easily find one through adoption. Families with more than one son often send their younger sons off to be adopted. In return, the birth families are each paid up to a million Japanese Yen.

In Japanese culture, the concept of beauty involves having a small mouth. Unfortunately, eating a large hamburger seems to go against this concept. When one restaurant chain (Freshness Burger) realized this, they developed the Liberation Wrapper. This wrapper covers the customer’s face while they are eating, so onlookers can only see the wrapper, which is imprinted with a woman’s lower face (and closed mouth, of course).

This is a pretty strange invention because the printed image of the woman’s face doesn’t even need to be there! It could’ve just been a plain wrapper, right? In North America, people would probably stare more at the wrapper than the woman eating a burger.

There’s a toilet-themed restaurant in Japan, so we shouldn’t be surprised that there’s also a museum dedicated to toilets. The “Toilet?! Human Waste & Earth’s Nature” exhibit was once on display at the National Museum of Emerging Science and Innovation. Although it has since ended, the exhibit made headlines, as it featured a giant toilet slide and offered guests (mostly children) the chance to wear a poop-shaped brown hat.

But, this exhibit did have a purpose beyond entertaining kids. The aim was to educate visitors about sanitation and waste. Although Japan has advanced toilets, there are still challenges for children in Japan and for individuals in less developed countries.

Located northwest of Mount Fuji, Aokigahara is a forest with exceptionally thick foliage. This is what unfortunately makes it a favored spot for those planning to commit suicide. The forest (dubbed “the suicide forest”) is the location with the second-highest number of suicides in the world. As many as 100 people are believed to have committed suicide there.

Japan has had a long history with suicide. However, the country has taken measures to prevent their high suicide rate, especially in the forest. There are security cameras and patrols at the entrance of the forest, as well as signs encouraging visitors to think about the effects of their actions on their family. 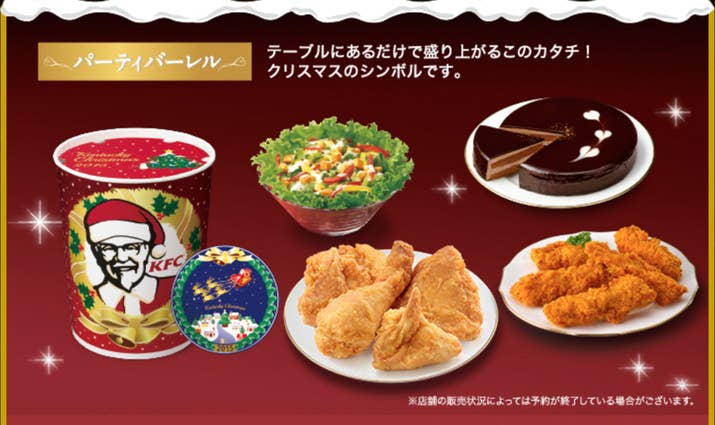 On Christmas Eve, North Americans and Europeans usually feast on a turkey or ham. And what do Japanese feast on? Some good ol’ Kentucky Fried Chicken. It seems rather odd to be eating fast food on Christmas, but, this isn’t your run-of-the-mill combo with two pieces of fried chicken, fries, and a Coca-Cola. Nope; in Japan you can order whole-roasted chicken, cake and even wine on Christmas! There’s a special Christmas Party Barrel—a festively-adorned bucket of chicken and nuggets, which comes with a chocolate cake, salad and festive plates—but, it’s so popular, you need to order it weeks in advance. This Christmas tradition started in the 1970s and still lives on to this day.

Are robots taking over the world? It sure seems so! There are multiple “robot restaurants” in Asia (with some even featuring robot wait staff). Shinjuku’s Robot Restaurant in Japan, however, is pretty unique. According to reviews, the restaurant is more like a tourist attraction known for its robots, rather than its food. Each night, there are three 90-minute shows featuring robots, acrobatic dancers, machines, music, special effects and lasers. Even the entrance to the restaurant is interesting—there is a brontosaurus and robot at the door. Tickets for the Robot Restaurant are 5,000 yen (this includes a bento box and beverage).

3. Entrance to the Afterlife

Just when we thought Japan couldn’t get weirder, we learn that it’s the supposed location of the entrance to the afterlife. Mount Osore translates to “Mount Fear” and it really does have an eerie appearance. It sits on a sulfur lake (which is considered the entrance to the afterlife), so sulfur bubbles through the cracks in the rocks. The howling winds and barren landscape add to its mystifying appearance.

On top of Mount Osore, there is also a Buddhist temple. Since visitors believe that the souls of dead children try to cross the lake into the afterlife, there are many statues of Jizo (a guardian of children and protector of the site). Visitors often leave offerings of clothing and children’s toys beside the Jizo statues.

This list wouldn’t be complete without the mention of a unique festival in Japan. Each year in March, the town of Komaki throws a fertility festival. This isn’t just any fertility festival, though. During the Kanamara Matsuri (AKA festival of the steel phallus), Shinto priests play musical instruments, there is all-you-can-drink sake available and participants feast on rice cakes. Sounds good so far, right? But, the weirdest part of the festival is the parade, during which a giant wooden phallus is carried from one shrine to another. Once the phallus has reached the shrine, prayers and blessings are recited by the Shinto priests.

1. Sleeping on the Job

If you were to fall asleep at work, what would happen? You would probably expect some disapproving looks, a warning letter or even a notice of termination. But, that isn’t the case if you work in Japan. It’s actually admirable to fall asleep at work there. Bosses see employees who sleep on the job as more dedicated and hardworking (they worked so hard, they are now exhausted). The cat-nap is meant to recharge their batteries, so they can keep working hard. If only all bosses around the world saw it that way—Mondays wouldn’t be half as bad (and we wouldn’t need to drink so much coffee)!